This is not really a review, more of an appreciation post for Kamala Khan and Ms. Marvel. If you aren’t familiar, Ms. Marvel is a 50+ issue comic produced by G. Willow Wilson and Sana Amanat through Marvel Comics. It follows a Pakistani-American Muslim teenager named Kamala Khan.

Kamala has lived her entire life in the Jersey City and hasn’t really felt like she was anything special until a terrigen mist gives her polymorph powers and she becomes the all-new Ms. Marvel, inspired after Captain Marvel (her favourite superhero). She comes into her roll just in time, as Jersey city is ripe with crime and the world seems to nearly end frequently.But despite her secret life as Ms. Marvel, Kamala still has a life, she has boy problems, high school to attend and the expectations of Pakistani immigrant parents and her older very religious brother Aamir.

Kamala Khan has come so far and endured so much since volume one. She has become more confident and mature and responsible, but she’s also become comfortable with her identity and self. As Ms. Marvel, Kamala learns of her power, and her ability to change the world, and it’s beautiful.

I think it is so important, especially in times like now, to have superheroes that are women. And especially important to have superheroes that are not white and superheroes that follow other religions other than offsets of Christianity. Superhero movies and comic books hold an appeal for people regardless of race, culture or religion, so everyone deserves to see themselves within superheroes, even if we don’t have superpowers.  I know there are characters within the Marvel universe (mostly in more obscure comics) that are of varied origins and religions, but they are not the focus and no one, except people who religiously read the comics know about them, which is unfortunate. Kamala Khan is one of the first female superheroes of colour and who is Muslim to headline her own series and I think that is absolutely amazing. I believe, we need more superheroes like Kamala Khan, but for all races and religions, and maybe one day we will. It makes me so happy that Kamala is getting her own Disney series, and possibly will be featured in the Captain Marvel sequel.

Kamala’s journey is not always easy, not only is she trying to save Jersey City from disaster, sometimes multiple times a day, she’s trying to be a good daughter and survive hell (I mean high school), which is something easier said than done. But she does it with a style that makes me smile and it very entertaining. She’s amazing, I could barely do high school, let alone save the world. 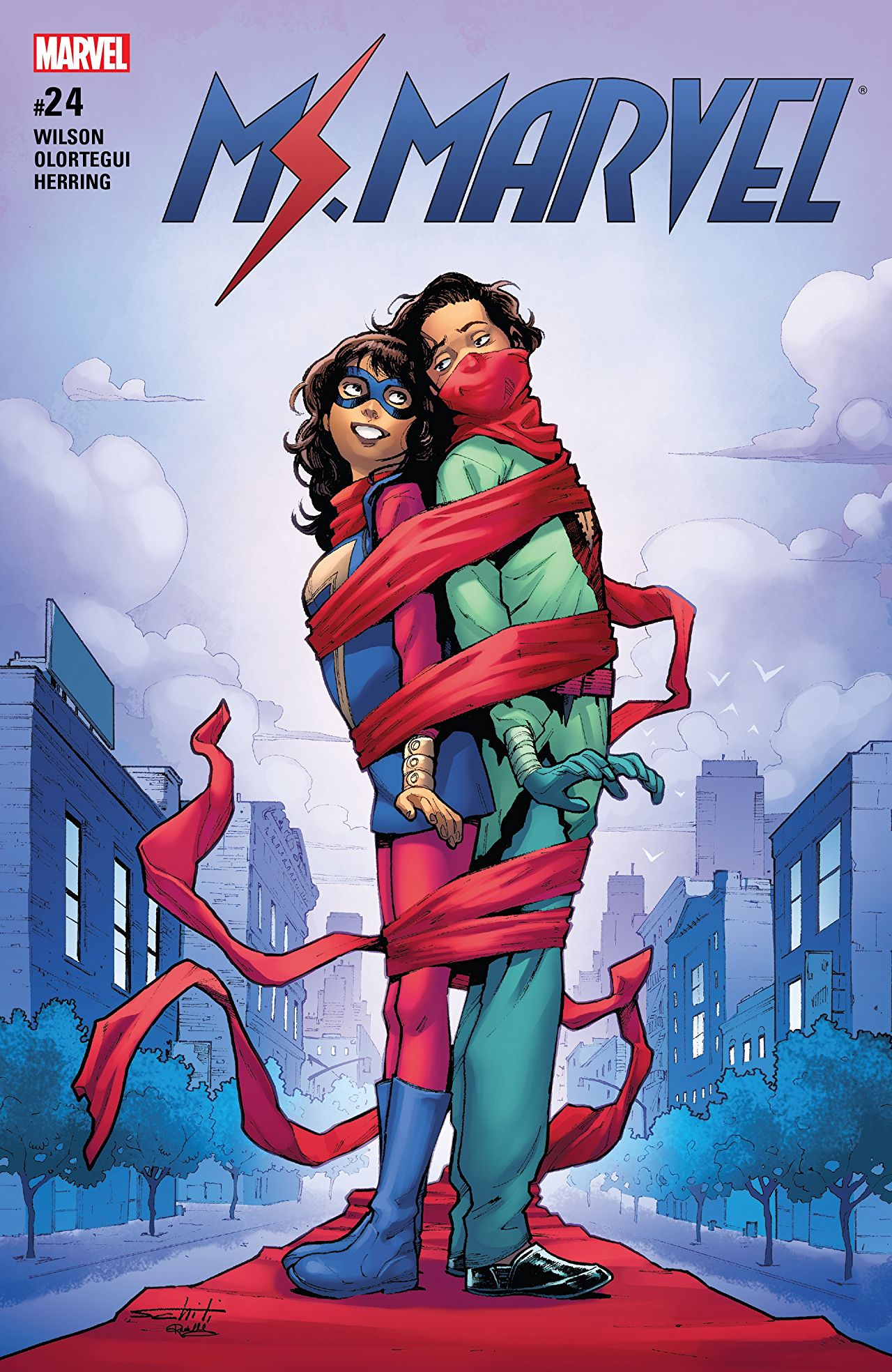 Also, the characters in this series are fantastic:

Kamala Khan is my icon. 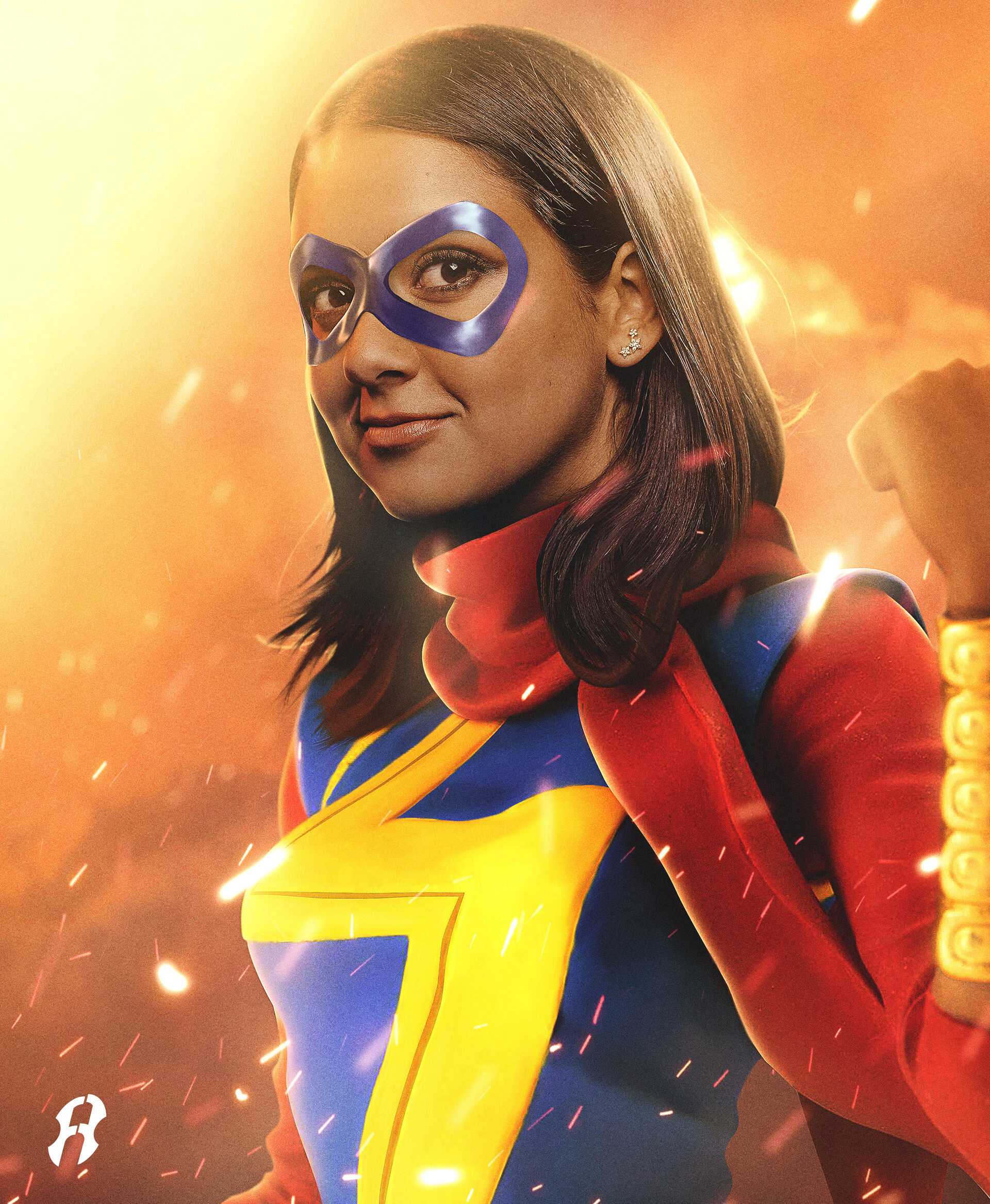 I wish I could manage my life as well as she does. And I appreciate that it shows her struggles, because that is a part of life, even for a superhero. Honestly, she’s probably the most relatable superhero within in the Marvel Universe. Also, Kamala as an Aunt makes my heart melt. 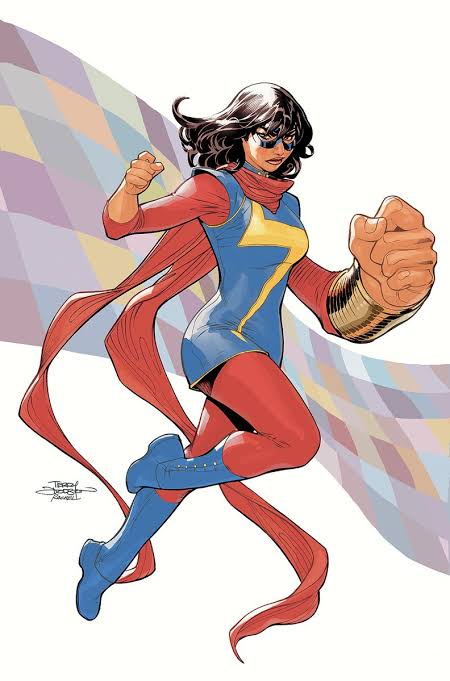 Bruno Carrelli is the best sidekick Kamala could ever ask for. 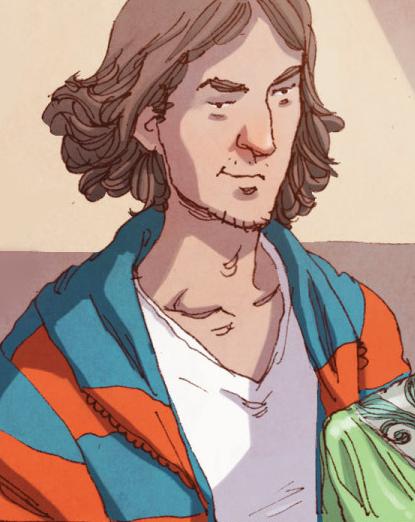 Bruno is supportive and loyal and helps Kamala in whatever way she needs. I love the fact that their partnership is built upon their friendship and their growing feelings for each other. It’s very realistic and Bruno is just an amazing character, I love him. 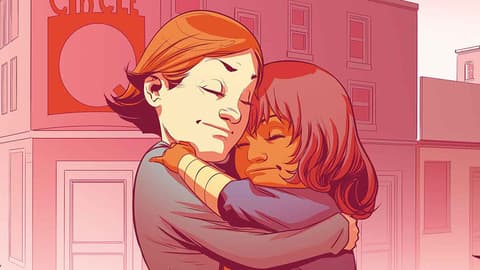 Nakia Bahadir is not here to play, she’s here to slay. 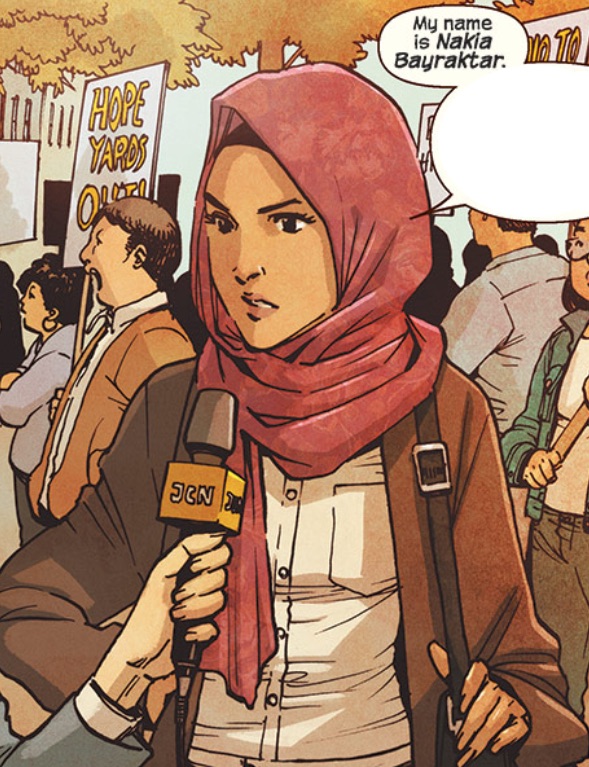 Zoe Zimmer is the lesbian superhero we all want. 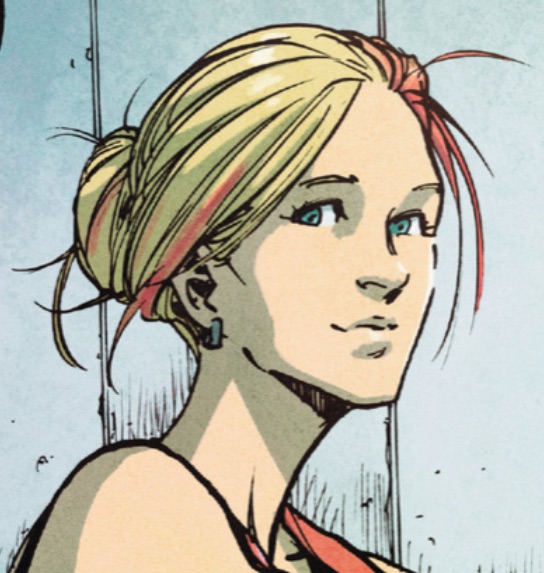 Zoe’s arc is so great, because she starts out as the typical mean girl (very Regina George esque) but then she finds her way to the end of the tunnel and becomes very close with Kamala and Nakia. She becomes a much nicer human being and one who is easy to love. She’s also a lesbian, and she stands in for Kamala Khan, which is iconic in itself. 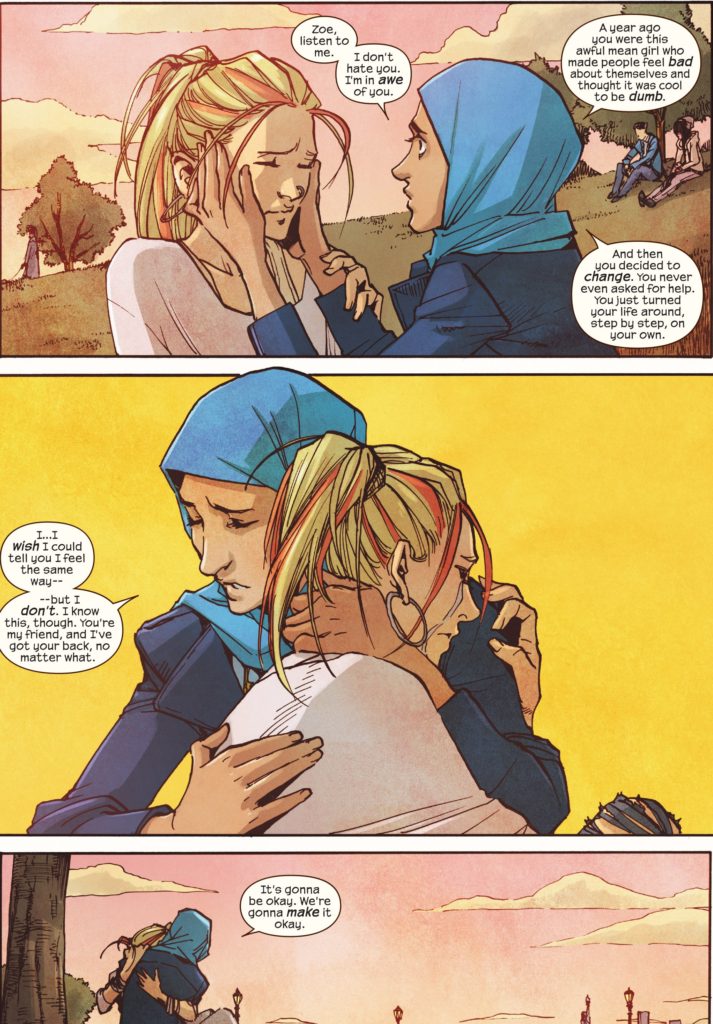 Aamir Khan is not like most brother characters, but he still extremely valid.

Aamir is not very confident in his deity. He doesn’t seem to have much of a life aside from religious activities and he’s kind of a goody-two-shoes, but over the course, I came to appreciate him. He cares deeply and he has his own struggles finding his way in the world. His growth is excellent, and we love him.

Tyesha Hillman Khan is the best sister-in-law in the Marvel Universe, and that is no lie. 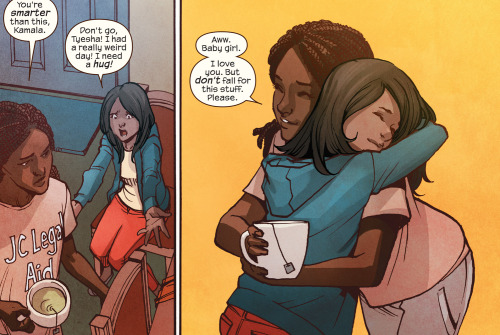 Tyesha is not like Aamir at all, but they complient each other so well. And the bond that Tyesha and Kamala share is a thing of immense beauty. I also love her ability to tease and be sarcastic and talk in TV references. 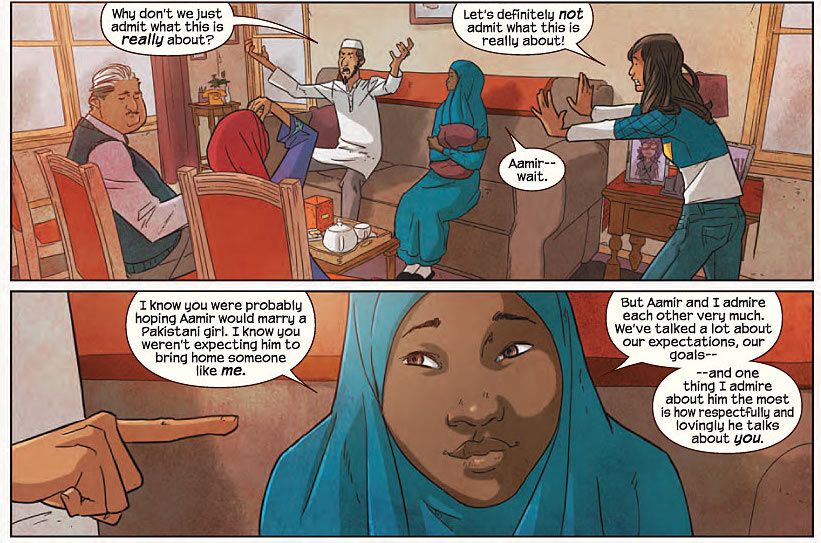 Gabe Hillman is Gabe and we love him for it. 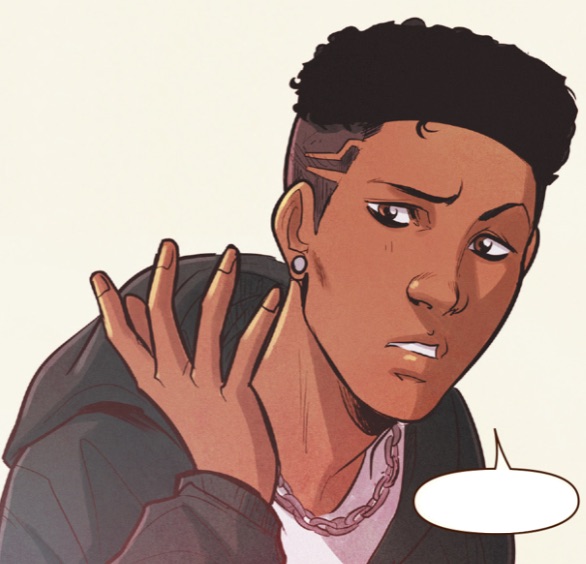 I think we all know someone like Gabe Hillman. He is Kamala’s “not” brother-in-law and he is the comic relief to the gang. He is hilarious and lightens the group’s dynamic.

Michaela “Mike” Guttierez Miller is not here to steal your best friend.

Although there could have easily been a lot of enmity between Mike and Kamala, G. Willow Wilson shows the world that girls can be friends and not fight over petty things like boys. Also, she is a scientist whiz and we stan. 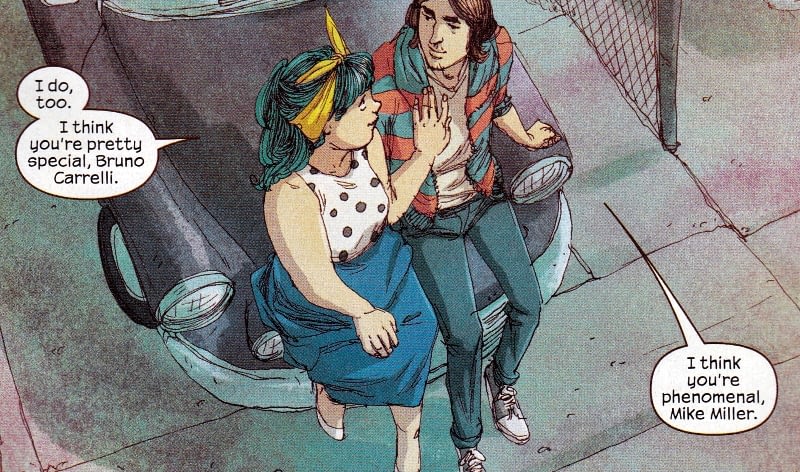 Kareem or Laal Khanjeer (Red Dagger) is basically Fawad Khan and I am okay with that. 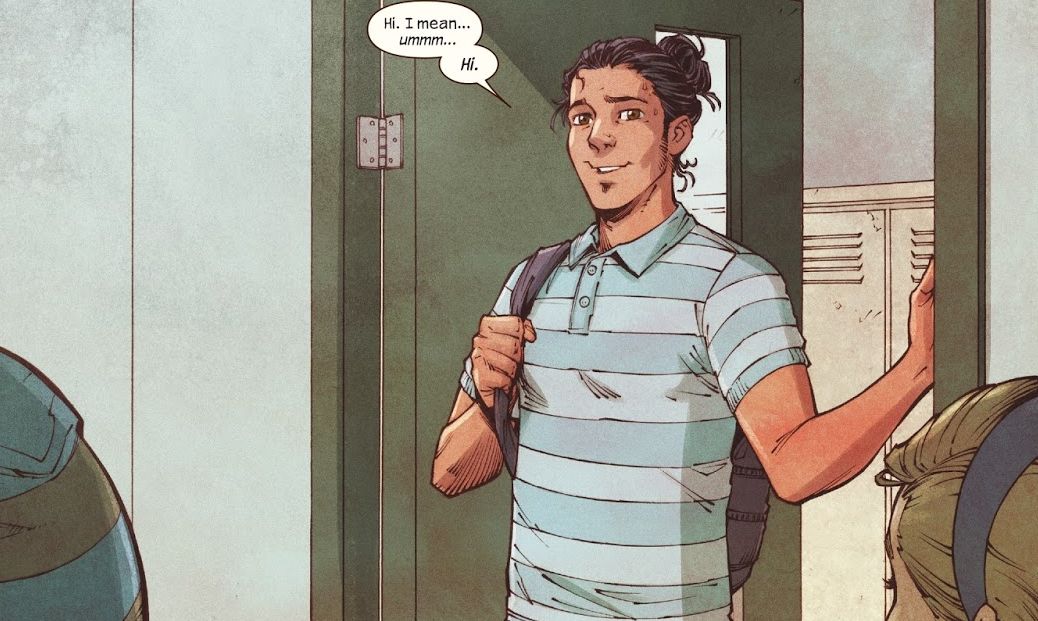 Kareem is everything. He is sweet, he is beautiful, he fights crime, he is powerful. 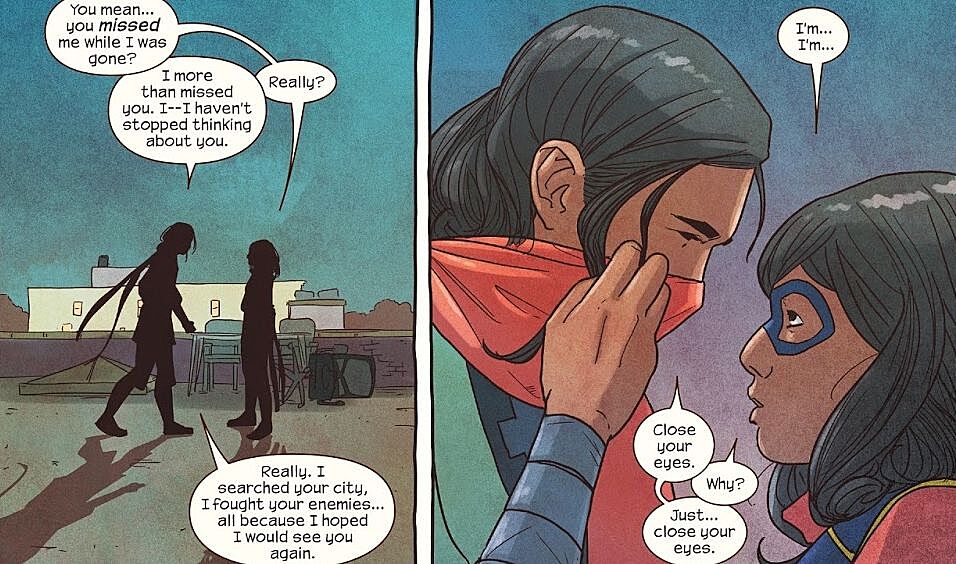 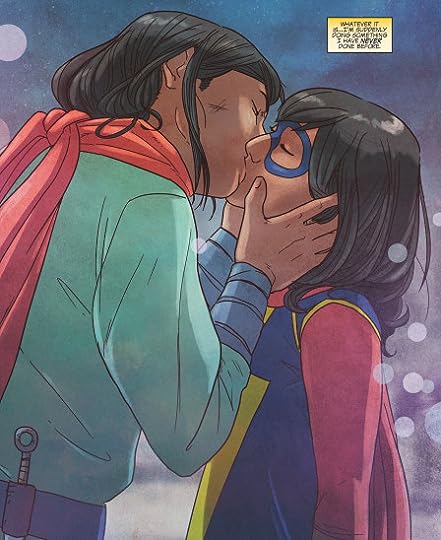 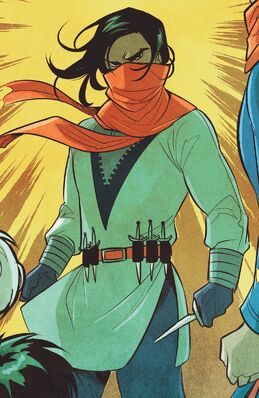 I love him, so much. He is the love interest Kamala deserves. 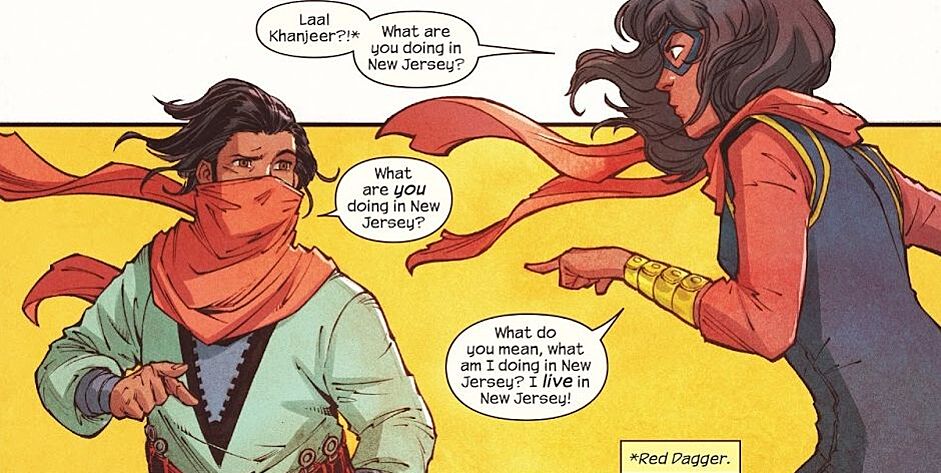 Kamran is probably the most handsome character in this entire series, and honestly, he is basically the George Wickham of this series.

He is beautiful and intriguing, but ultimately the anti-hero, and in some ways, almost a villain, but damn is he beautiful. I think I gasped out loud when he first appeared.

Sheikh Abdullah is the best!

Sheikh Abdullah is the Imam is the Jersey City Masjid and he is the best. He gives great advice, is very well-meaning and supportive. His conversations with Kamala about boy troubles or whatever just made me smile like it was nobodies business. 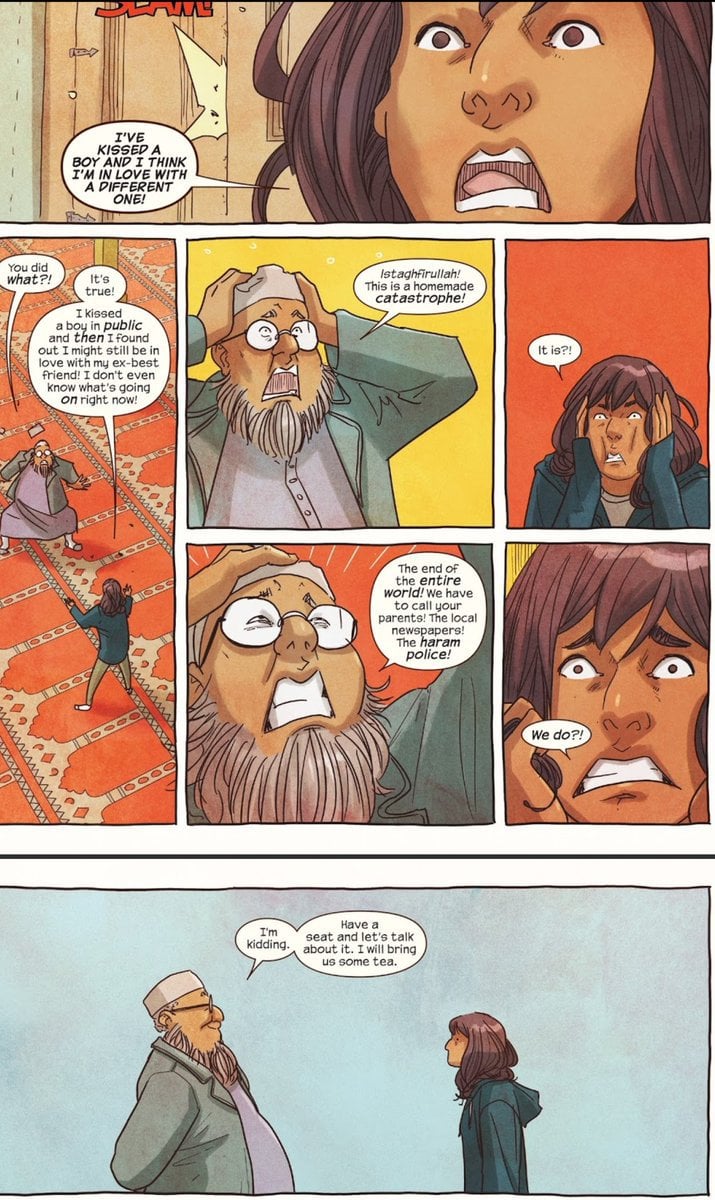 Malik Khan is going to grow up and blow us all away. 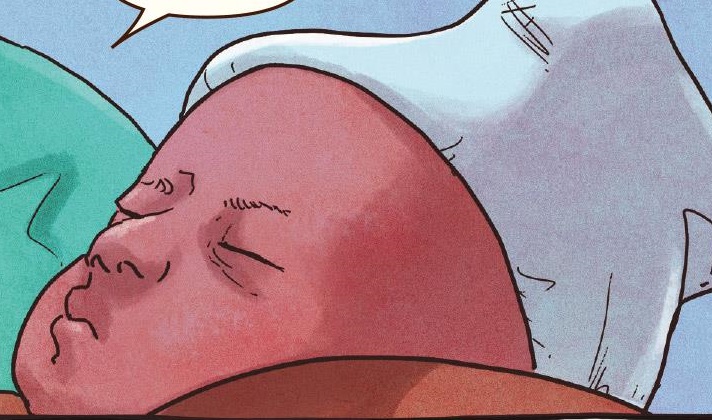 Malik is the son of Tyesha and Aamir Khan. He makes a few brief appearances in the last two volumes but I think he is going to do great things in the next series.

His moments with his Phuppo Kamala are so damn precious.

Muneeba and Yusuf Khan are the best superhero parents since Bob and Helen Parr. 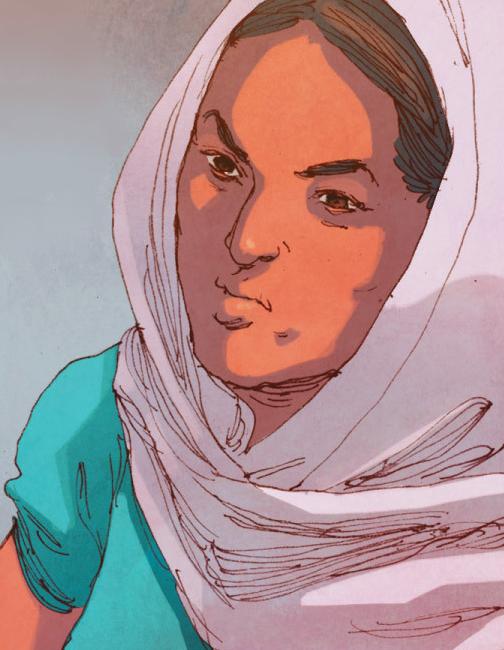 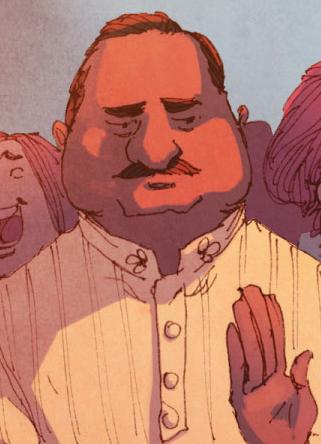 While Muneeb and Yusuf are not superheroes themselves, they grow to be very supportive of Kamala and her double identity. They come to understand the importance of it to Kamala and they support her and it’s a thing of great beauty. 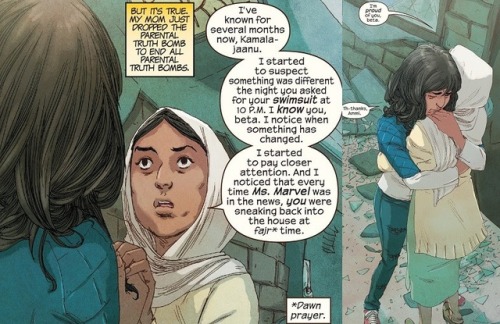 Shoutouts to Aisha, and Kareem Khan for making this all possible!

And to all the badass ancestors Kamala Khan needed to thrive! 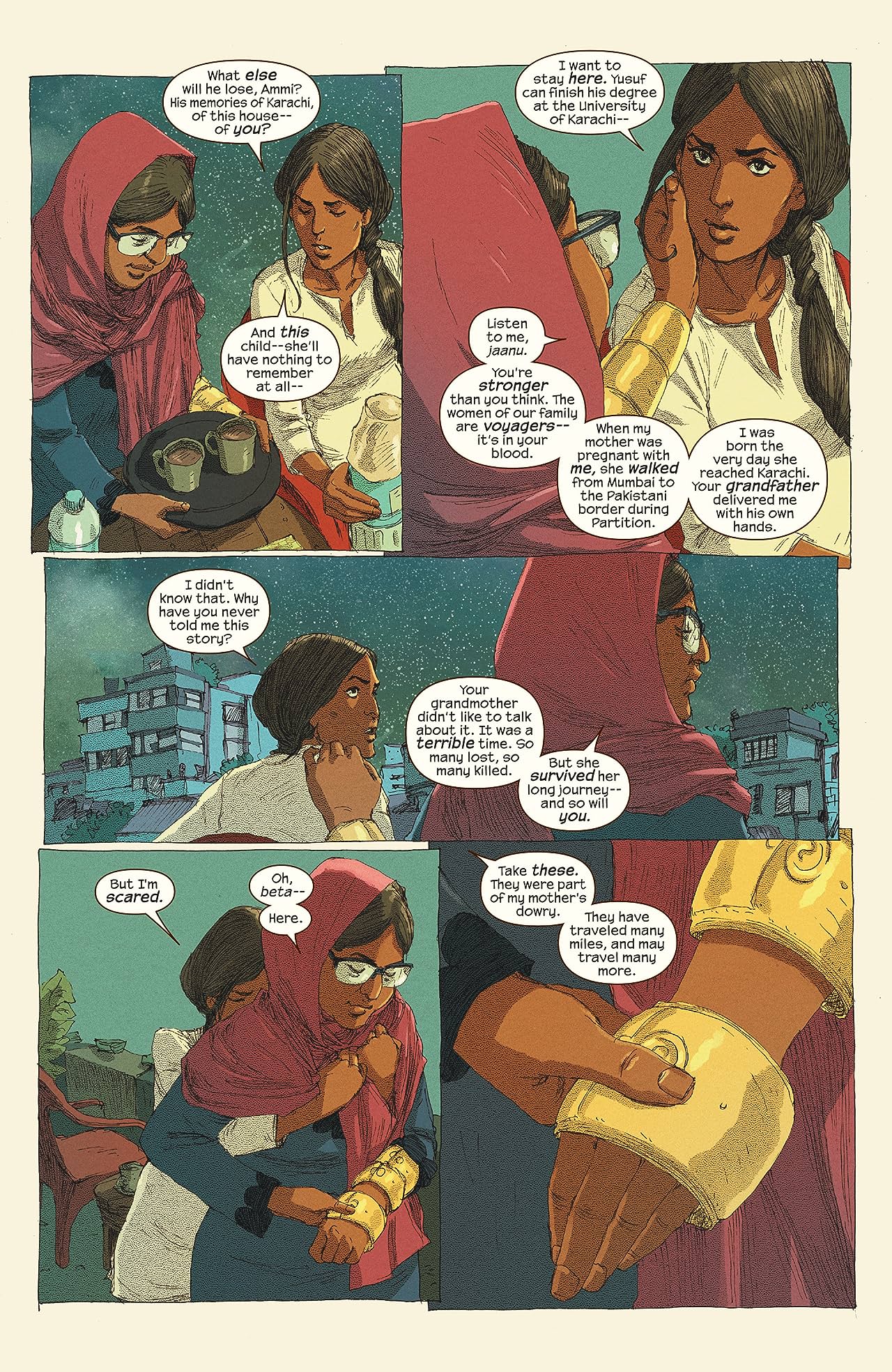 I thought the ending to Ms. Marvel was perfect.

❝If I’ve learned anything in the past few years, it’s that there is always another level to beat. But if you hold on to what’s important, then…you won’t have to beat it alone.❞

It was nerdy and unique and creative. Fortunately, it’s not the end for Kamala Khan, because Magnificent Ms. Marvel is coming this October, and I am really excited to see where this story goes next.

❝You have our word Kamala will always be out there, fighting the good fight – taking down the bad guys and helping those who need it. She just hopes that you will be, too. Remember: ‘good’ is a thing you do, not a thing you are.❞

Do you have a favourite superhero? If so, please tell me in the comments!

One thought on “Kamala Khan is my hero // or an appreciation post of Ms. Marvel by G. Willow Wilson”